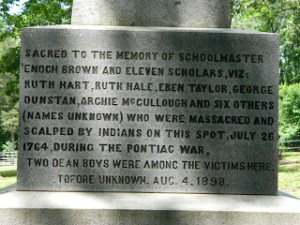 On May 7, 1763, a Native American alliance led by Chief Pontiac launched an attack against a British force near Detroit.  This was the start of Pontiac’s War, a series of sieges and battles that lasted a full year and ended with the British using smallpox blankets to commit biological warfare against the natives.

It was during these hostilities that Pennsylvania’s Governor John Penn made a “promise of bounties to be paid to any man for Indian scalps.” Gangs of settlers took his word and began murdering and scalping Native Americans.

The natives retaliated with the first school massacre in what would become the United States on July 26, 1764. Three native warriors entered the schoolhouse of teacher Enoch Brown and his 11 pupils.  They clubbed the teacher and  9 children to death before slicing off their scalps, with one painful exception.  Archie McCullough was still alive when his scalp was removed, though the natives may have believed him dead when they left. McCullough crawled down a hill to the spring where the school collected their drinking water. He was found there by a passersby and they found the rest of the students a few hours later.

A few days after the incident, the teacher and children were buried together in one grave, which was not marked. As years passed, the story was forgotten and became a whisper or rumor of the past. Seventy five years after the massacre, a committee of responsible citizens of the area conducted a dig in the wooded area hoping to prove that there was indeed a burial. With a little luck the grave was found on the first excavation. However, no further action was taken for forty years when, while in a Centennial Convention meeting, a committee was formed to create the Enoch Brown Park and Monument Committee. 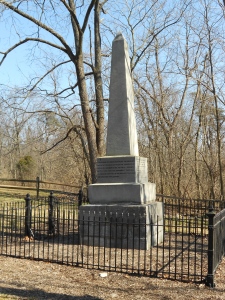 After a slow start to the park and monument committee, finally, by 1885, a memorial was laid.

Each side of the monument had an inscription to remember Enoch Brown and his ten students. The east side of the monument listed the names of those killed. The north side commemorated those who made donations for the park. The west side told where the remains of those killed were placed, and the south side contained a poem dedicated to those massacred.

Today, that monument still stands to remind the citizens of Greencastle how brutal life had been during the early pioneer times. David Dixon, author ofNever Come to Peace Again, claimed this time as a period of “war without mercy.” In many ways and on all sides, this was, indeed, true. Franklin County’s Enoch Brown Monument captures the memory of but one incident of that bloody time.