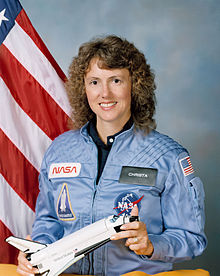 Christa McAuliffe was a civilian mission specialist aboard the Challenger Space Shuttle, and died with the rest of the seven member crew when Challenger exploded 73 seconds after launch on January 28, 1986.

Christa McAuliffe graduated from Framington State College, Massachusetts, in 1970 with a degree in history. A dedicated junior high school teacher (she taught history, social studies and civics), Christa McAuliffe was also a volunteer with her church, a Girl Scout Leader and a hospital and YMCA fundraiser.

Christa McAuliffe was scheduled to teach two lessons from the space shuttle. She was part of the NASA Teacher in Space project, selected as its primary candidate in 1985. She won out over 11,500 applicants; NASA officials were reportedly especially impressed with her course on “The American Woman” which she had developed and taught. Barbara Morgan was the backup “Teacher in Space” who also trained with NASA in the astronaut training program.

When Challenger exploded 73 seconds after takeoff, millions of horrified schoolchildren and adults were watching from schools, homes and offices worldwide.

Her husband Steve and their two children, Scott and Caroline, survive her.

Many schools and scholarships have been named in honor of Christa McAuliffe.