An innocent Christmas card led an alcoholic husband to believe his wife was having an affair with a popular Hoboken High School history teacher who the husband shot dead on February 12, 1998, then turned the gun on himself. 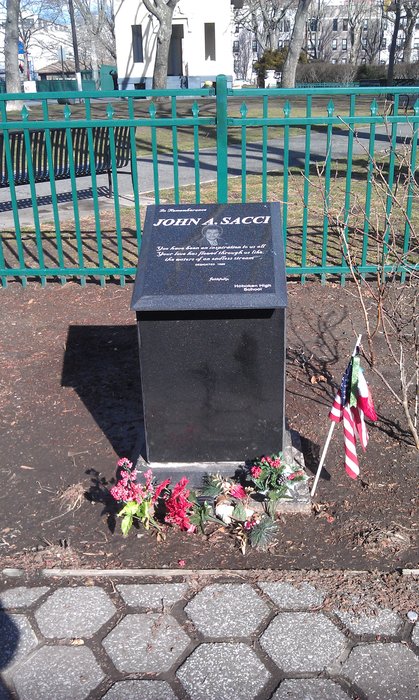 A sectioned off memorial at Columbus Park offers a placard and flowers in memory of John A. Sacci, a well-respected Hoboken High School history teacher who was shot to death  as he was walking from his car to the high school.

The popular teacher, who also advised the debate team and was involved in many activities, was walking from his car back into the school when he was shot next to Columbus Park by Gerasimos “Jerry” Metaxas of Fairview, a jealous man who was apparently convinced of an affair between Sacci and his wife. Metaxas then turned the gun on himself three blocks away and shot himself in the head.

There was no affair. Sacci’s family sent the card to Metaxas’ wife, Linda, in December 1994. Linda Metaxas saved the card.