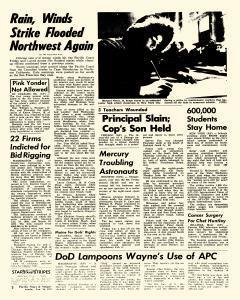 52-year-old middle school principal, Rudolph Jezek Jr., was killed in his office by 14-year-old former student said to be angry about being transferred to a social adjustment center.

The account was pieced together by various persons. The student shooter calmly walked into the principal’s office past three or four women clerks and secretaries and through the swinging door along one wall and into Jezek’s small, windowless, private office.  Calmly the youth drew the gun from his pockect and stated, ‘I don’t want to go to Mosely,’ he cried and ripped off a shot that whizzed past Jezek’s head and tore a three-inch round of plaster from the wall.  Jezek tried to get to the door. The student kicked the door closed trapping the principal. The student fired, and fired again.  One high shot tore through the principal’s neck. The next, a little lower and to the right, plowed into his chest.  Two white holes in the green plaster wall show the shot grouping. The student rushed out of the office running for his home room encountering a security guard and assistant principal where he shot at them. Both were wounded and the student pushed forward to his home room where he encountered his homeroom teacher taking several shots but missing on all accounts when he was over powered and disarmed by other youth.